The UK might be behind the US when it comes to driverless car research, but it’s moving forward (at a sedate and pedestrian-friendly speed) with driverless pods. Today, the UK’s Transport Research Laboratory (TRL) announced the beginning of a trial of a self-driving shuttle service in the London borough of Greenwich. As reported by the BBC, around 100 locals will be able to take rides in “Harry” — a prototype driverless pod — in the area situated near London’s O2 arena.

The vehicle will ferry participants up and down a preset route over the next three weeks. Harry can travel at speeds of up to 10 mph, is capable of seating four, and although it uses cameras and LIDAR to find its way, a trained technician will be on board at all times to monitor its progress. It’s a limited trial for sure, but the UK government is hoping these sorts of autonomous shuttles will play a big part in the country’s public transport, especially in areas not served by bus, train, or tram routes. 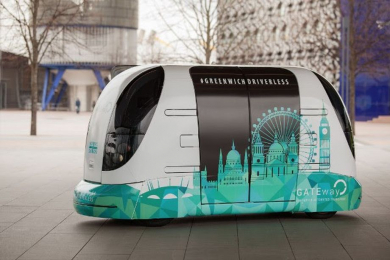